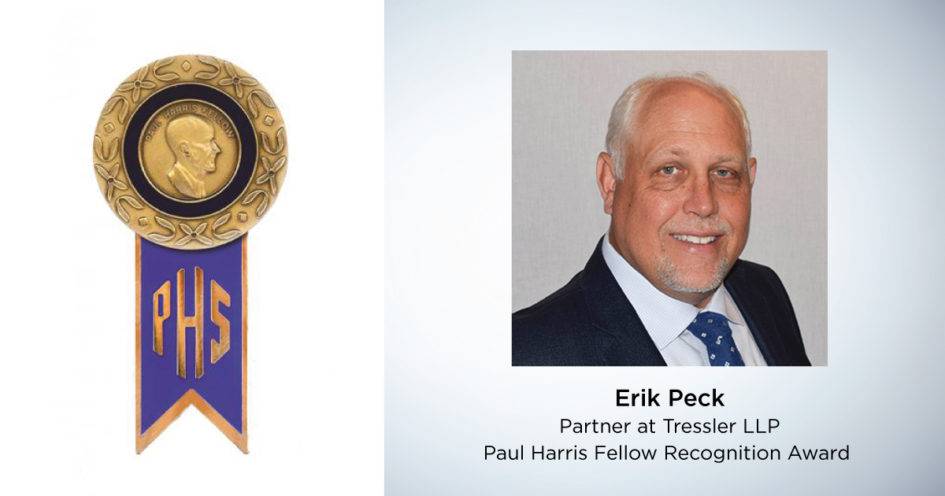 Erik Peck and the local Rotary Clubs took on a project to rebuild a playground area at a local battered women’s shelter. Erik obtained a grant from Home Depot and organized the project. The team buried drainage pipes in the playground area and removed a broken swing set and old benches along with a rotting storage shed. They then installed a new shed, swings, picnic benches, and some planters for a small garden as well as a new grill for cooking outdoors. To provide privacy for the children at the shelter, the team installed a screen in the fence.

“Receiving this award was a great honor and one I never expected,” said Erik Peck of Tressler LLP. “The honor really goes to all of the clubs and members who helped make this project so successful and who make Rotary such a worthwhile cause.”

The children at the battered women’s shelter now have a safe place to play and enjoy the outdoors. This project was in conjunction with Rotary’s effort to support abused women and their children as well as end violence against women.

Erik is currently the President of the Countryside Rotary Club and has been a member for over 20 years. While Rotary is an international service group with clubs in every country, this group aims to help local communities with similar projects. Erik’s legal practice also reflects his passion for local communities. He primarily represents municipalities, often serving local governments in Illinois as general counsel, prosecutor and administrative hearing officer. He looks forward to continuing Rotary’s great mission to better our world, one step at a time.